The identity of emergency vehicles in the UK and beyond is critical to the safety of all road users and the general public. From preventing traffic collisions to establishing recognition, emergency vehicle markings are more than just decoration.

Battenburg livery markings have now become a standard for emergency vehicles within the UK, as well as various other countries. In this guide our experienced professionals at Lakeside Group, UK suppliers of leading retroreflective materials, explain what battenburg markings are, the history behind them, legislation relating to them, and vehicles permitted to use them.

A buyer’s guide to reflective materials for vehicles >

What are battenburg livery markings?

The battenburg pattern consists of alternating rectangles of colours; usually one light and one dark. There are usually two horizonal rows of these blocks. The pattern name, supposedly, comes from battenberg cake!

Battenburg pattern livery markings are predominantly used in the UK, but they are also found in other countries, including Belgium, Australia, China, Iceland, Switzerland, and some US States.

Which vehicles use battenburg livery markings?

Battenburg pattern markings are mostly used for all manner of emergency vehicles, from ambulances to police cars, fire engines, as well as vehicles which transport blood, Royal National Lifeboat Institution vehicles, some Forestry Commission vehicles, and certain vehicles owned by the Secretary of State for Defence. View the full list here.

The pattern is also used on vehicles belonging to the Driver and Vehicle Standards Agency (DVSA) and National Highways Traffic Officer vehicles.

Private vehicles are not strictly allowed to use retroreflective battenburg markings according to the Road Vehicles Lighting Regulations 1989 (RVLR), however some still do. Private ambulance services that do not work for the NHS, for example, often adopt the same yellow and green battenburg markings despite the restrictions in RVLR.

The battenburg patten for vehicle markings was developed in the 1990s by the Police Scientific Development Branch to make traffic patrol cars more visible. The brief was to create livery that would maximise visibility from up to 500m in daylight or under headlights, and that marked them distinctively as police cars. This would in turn reduce traffic collisions, increase conspicuity, and make police cars nationally recognisable.

Originally the use of battenburg markings was just for traffic patrol cars as they required especially good visibility at all hours of the day. However, over time, other emergency services in the UK adopted the pattern and it can now be seen in other countries too.

Battenburg livery markings were recommended for all police vehicles, not just traffic duty, in 2004 by the Police Scientific Development Branch. Within the guidelines, it was stipulated all police vehicles use half-battenburg livery (one line of blocks), and it was recommended that large rectangular blocks of retroreflective material in blue and yellow colours were used. The pattern had been widely adopted since the 1990s anyway, but this made the change official, enhancing the visibility and recognition of police vehicles in a standardised way.

Even though the guidelines were published back in 2004, contrary to popular belief, this still makes it more recent than specifications such as RA1, RA2 and even R3B which was originally published back in the mid 1990’s (though not referenced as R3B). To date, there is no evidence to suggest that the specification is not delivering the job it was originally intended to do.

The use of Battenburg livery markings is controlled by the RVLR. This legislation dictates which vehicles can use battenburg markings and in which colours.

Importantly, any colour other than amber used for livery markings must be approved by special order:

4.2 RVLR require that retro-reflective markings on the sides of vehicles that are intended to make the vehicle more visible must be amber in colour. Retro-reflective markings of other colours such as the blue, green or red schemes used in the battenburg pattern are currently prohibited unless the Secretary of State for Transport has issued an order under section 44 of the Road Traffic Act 1988 (“a special order”). (source)

Essentially, even NHS ambulances have a special order to use colours other than amber. Even if some vehicles don’t use the prescribed colours within the battenburg pattern, it is common to see police cars, for example, with large blocks of colour.

View the table outlining which colour of battenburg pattern materials each vehicle type is permitted to use here.

As with any retroreflective vehicle markings, battenburg patterns help to make vehicle more conspicuous at night due to the large block size taking up a large amount of the vehicle exterior. This has an instrumental knock on effect on road safety, especially for emergency vehicles that often stop in unexpected places.

Battenburg markings and additional reflectivity help to make emergency vehicles more visible during the day and alert road users to their presence. This clear distinction between emergency vehicles and civilian vehicles is also important in ensuring an appropriate response from road users.

The use of a vehicle outline over the A, B and C pillars also ensures the human eye sees a vehicle shape and helps in the distinction of a vehicle over other street items such as reflective signs.

The standardisation of battenburg markings for emergency vehicles has created a common, recognisable identity. Again, this helps to ensure everyone is aware when an emergency is occurring and will act accordingly.

Through each step of the process, Avery Dennison Visiflex V-8000 is ideally suited to the emergency service vehicle market. Fast economic conversion, easy to apply, robust whole life performance and simple vehicle decommissioning. See for yourself with our case study – 120,000 miles later it looks as good as new!

To find out more about our reflective material for battenburg kits and to get a quote, contact our friendly team. We have supplied our products to countless emergency vehicle fleets – like the time we helped ensure high visibility for South Central Ambulance Service’s Community First Responders – just view our case studies! 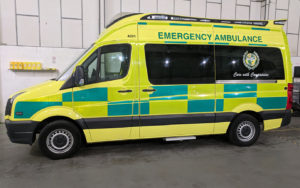 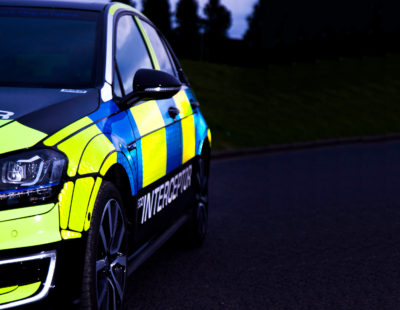 Blog | A Buyer’s Guide to Reflective Material for Vehicles 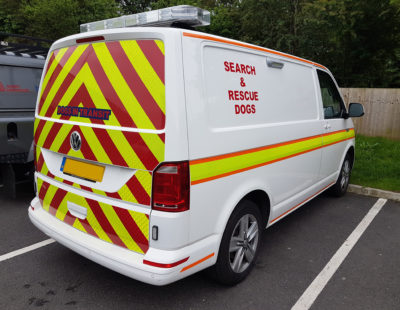 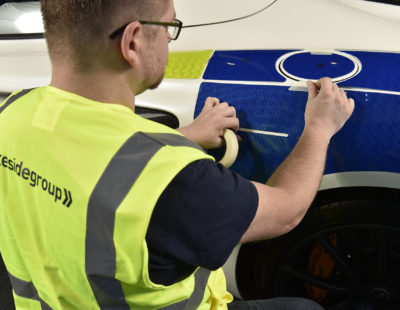 Posted 1 year ago Read more
Back to Top

To be kept up to date on everything Lakeside Group has to offer, enter your details below.

Looking for a solution?