If you want something to standout, particularly in dull light, whether it be for safety reasons, signage, decoration, marketing or just for fun, then using fluorescent film will probably be the solution. With multiple applications, this seemingly magical material will always be noticed, and glows like nothing else in the half light.

What makes something Fluorescent?

Fluorescence occurs when light is emitted from a molecule which has been stimulated by ultraviolet light energy. The process involves electrons being ‘excited’ to an increased energy level, to a point where they lose energy in the form of heat, and the electrons, as they relax back, emit a light which we observe as a fluorescent glowing colour.

The Applications of Fluorescent Film

It is the ultraviolet rays from the sun that react with the fluorescent colours to create the apparent glow which increases the daytime visibility of fluorescent film. The fluorescent effect is particularly apparent in fog, heavy rain, at dawn, at dusk and in other poor visibility conditions when fluorescent colours help objects to remain visible. It is therefore a sensible idea for cyclists or pedestrians walking along a country lane, for example, to wear or carry something fluorescent. Wearing or carrying fluorescent and reflective materials means that an individual can be seen up to six times further away.

The guidance adds that these markings ought to cover as much of the rear-facing part of the vehicle as possible, while not obscuring windows, vehicle lighting or registration plates. Where any rear facing high visibility markings are obscured by a device mounted on the vehicle, such as with a cone laying adaptation, additional high visibility fluorescent film rear markings should be applied to the face of the device displayed to the rear and to other road users.

The Different Types of Fluorescent Film

An important aspect of using fluorescent film (often referred to as “vinyl”) is choosing the right type for your application, as there are two basic types with different characteristics.

A “cast” film is manufactured from a premium grade of PVC which begins the process in a liquid state and is poured into a drum. A layer of liquid is coated onto a liner and is then dried and cured, coated with an adhesive followed by a backing liner. The original liner is then removed. The cast film has an enduring quality and a long life.

Manufacturing “Calendered” films, on the other hand, begins with a solid to which plasticisers and stabilisers are added. It is then passed through rollers until the film reaches the required thickness. After this, the material is then adhesive coated, and a liner added. As the film isn’t flat at the beginning, in time it shrinks. There are two types of Calendered Films: “Polymeric Calendered” films which performs much better in exterior applications than “Monomeric Calendered” films.   Polymeric films have better grades of plasticizers added to reduce shrinkage.

Cast films are usually very soft to handle and are easier to cut, weed (remove the material that you don’t want in your design) and apply, than calendered vinyls. The films are primarily available in a high gloss finish and are the more suitable for laying over complex contours as well as being the favoured option for the more extreme exterior applications and also for vehicle or boat wraps. The quality of the raw materials used also ensure cast vinyls have the highest levels of durability and maintain colours and properties better than other fluorescent vinyl films.

It Doesn’t Shine in the Dark

As fluorescent materials don’t shine in the dark, they are often combined with reflective materials for warning signs, name plates and graphics of all types that require special high-impact visibility day and night. In response to this need fluorescent films can be combined with microprismatic retro-reflective films to provide night-time visibility.

Many colours can be fluorescent, most common of which are yellow, green, pink and red.

For safety clothing, yellow and orange fluorescent clothing is often worn under health and safety laws and police officers, postal workers, lorry drivers, builders and refuse collectors all wear jackets with fluorescent materials. Lifeboat crews wear orange lifejackets as orange shows up best against blue and grey water – a reason why children’s armbands are often orange too. Horse-riders on the other hand often wear pink because it is a colour rarely found in nature and stands out well against autumn leaves. Clothing may use tape that is both retroreflective and fluorescent for additional Hi-Viz.

There is no doubt that the lives of many people have been made safer through the use of fluorescent film as a visual aid in poor visibility, while at other times fluorescence has added a bit of fun and colour to events. As each decade passes more and more applications, including fluorescent dyes in medical research, are being found for this very unique material.

For information and guidance on the very best fluorescent films for your business, simply get in touch with our expert team here at Lakeside Group. 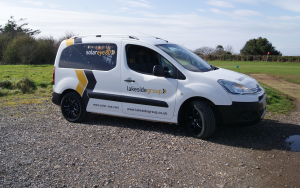 Blog | Should You Be Branding Commercial Vehicles?

Looking for a solution?